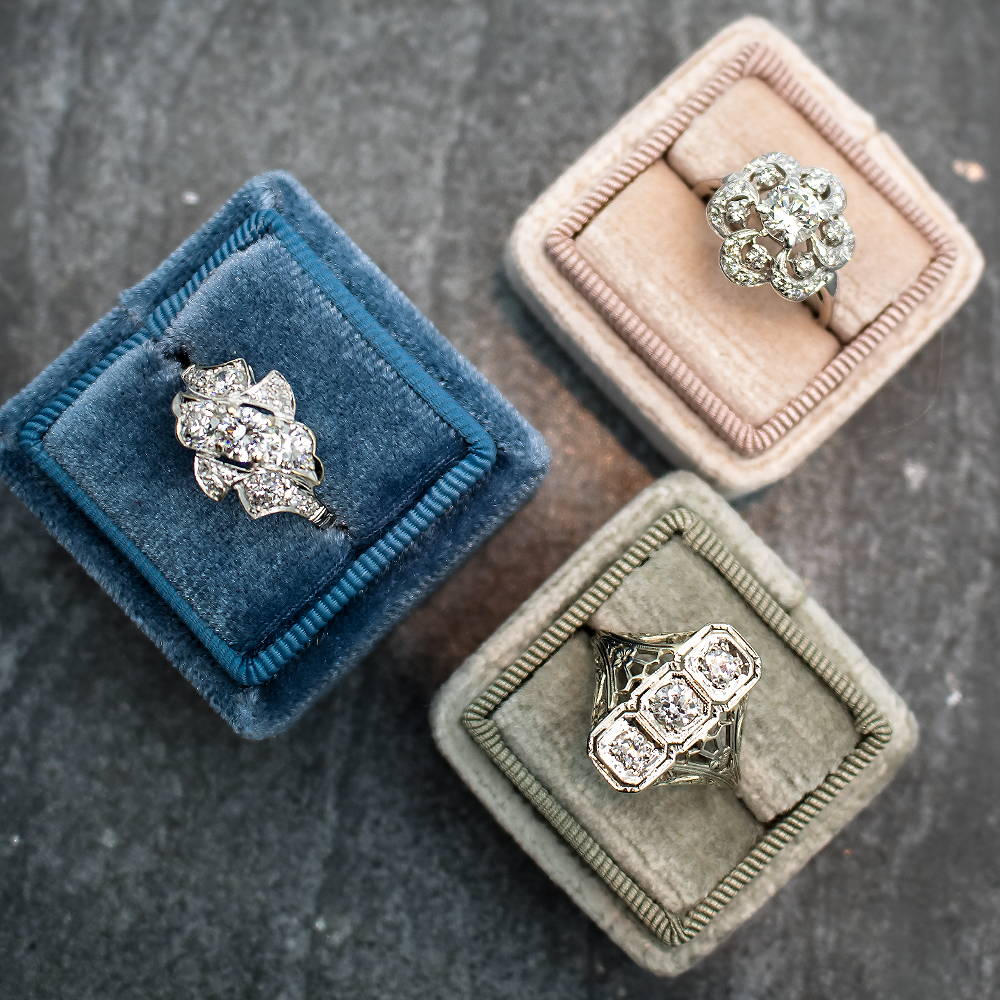 The engagement ring may be the single most important purchase you will ever make. Not only in terms of value, but the meaning that comes with it—just think of the memories that it promises! And because we’ve been helping couples find their perfect engagement ring for quite some time, the experts at JB Hudson know that finding the perfect ring is not merely a choice—but a journey.

The experts at JB Hudson want to make sure that your vintage engagement ring search results in you finding the perfect one. Like any engagement ring, there are certain things you should know that will help you during your search.

Most engagement rings surviving from the early 20th Century are made from white gold.

Platinum has an extremely high melting point (3,190 degrees Fahrenheit) which hindered small jewelers from fashioning platinum into jewelry. This changed after the invention of the oxyhydrogen torch in the later part of the 19th Century, which allowed jewelers access to the high temperatures needed to work with platinum. Shortly thereafter, the craze for platinum swept the world. All of Europe fell in love with the metal; the love of its high luster and buttery texture swept over the United States during the 1910’s.

The Great Depression of the late 1920’s made sales of the ultra-rare platinum all but cease. And twenty years later, the war machines of World War II need platinum for the war effort, resulting in jewelers abandoning its use and citizens selling their existing platinum pieces for scrap metal.

Just because platinum was not available to jewelers did not make the demand for white metal any less strong. Fortunately, a new gold alloy known as white gold was developed in Germany during 1912. With the mass migration of European immigrants to the US, jewelers familiar working with white gold offered a less expensive (and readily available) alternative to platinum. 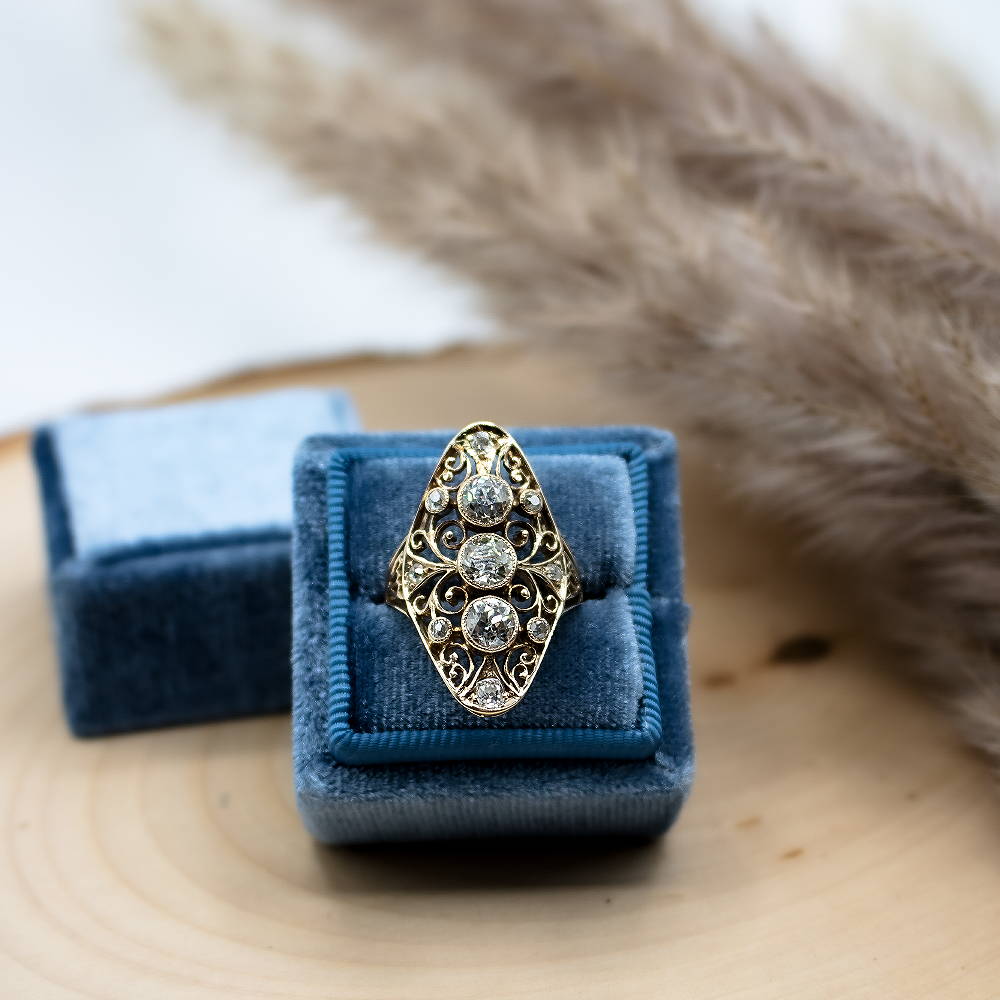 The cute little scroll work found on a lot of vintage engagement rings has a name—filigree.

One of the most easily identifiable features of vintage engagement rings are the small details made from gold wire known as filigree. Filigree allowed a jeweler to showcase their metalworking ability and save money while at it. Because filigree uses less metal than solid piece of metal, it costs less in raw material. While strikingly attractive, the use of gold wire in place of solid metal does carry with it some inherent risks.

Filigree, especially when it is used in rings, is susceptible to being crumpled when struck. Because there is less metal to help the ring hold its tenacity, the filigree wire is liable to fold and crush under pressure. Now, this is not reason enough to dissuade you from wanting a vintage engagement ring! There is a reason they have endured almost 100 years—they are built to last! Just be cognizant of the risk of turning your beautiful filigree work into something that resembles modern art.

The round diamonds used in most vintage engagement rings are referred to as Old European cut.

The round diamonds we think of today are known as Modern Brilliant, which were first perfected and patented in 1919. The new design rearranged the position of the facets, bringing out the brilliance of the gem—just like the name suggest. Prior to the Modern Brilliant, round diamonds were cut in a pattern known as the Old European cut. Instead of focusing on brilliance, the Old European cut diamonds were made to bring out their color and clarity.

Brilliance wasn’t too important to the gem cutters of the late 19th and early 20th Centuries. Electricity and electric light were still foreign concepts to most except the ultra-rich. Most people lived by gas or candlelight which produced a warmer, less bright form of illumination. The Old European cut diamonds excel in that type of warm light—emitting a romantic glow versus the intense sparkle of the Modern Brilliant

Some vintage engagement rings need special attention before wearing them every day.

There is one common trait amongst jewelry: it gets worn! And when jewelry gets worn, it eventually needs attention and repair. The same is true with vintage engagement rings. Here is a list of things to think about when shopping for one:

Make sure the prongs securely hold the center stone in place. Gold prongs wear faster than platinum prongs, but both types need to be rebuilt and replaced when worn down. Be sure to have your vintage engagement ring checked by a trusted goldsmith to make sure the center stone is held securely.

The bottom part of the ring (known as the shank) can get thin and brittle, causing it to bend or break. Because the shank sees more wear than the top of the ring, it tends to wear out first. Be sure that there is plenty of metal there to ensure you can wear your vintage engagement ring daily. A goldsmith may recommend a complete replacement of the shank, which is especially useful if you plan to have the ring sized.

Some vintage engagement rings are not suitable to be worn every day! Unfortunately, some vintage rings have seen too much wear in their lifetimes to be suitable to be worn for anything other than a special occasion. Not to worry! The team of sales professionals and goldsmiths at JB Hudson are here to advise you on repairing or purchasing your vintage engagement ring.

Can I have a vintage style engagement ring made?

Of course you can! Our team of expert custom designers are here to help you design the ring of your dreams—complete with all those vintage details you love! We even have a supply of Old European cut diamonds that would make even the most die-hard vintage fan swoon.

Another benefit to custom design at JB Hudson—we can take your family diamond and turn it into the vintage-inspired ring you really want. Yes, even your mom’s 1.47ct marquis cut diamond can be transformed into the coolest and most unique piece you’ll ever own. And because we’re starting with a completely customized ring, the sky is the limit! Let the team at JB Hudson create a meaningful and memorable heirloom engagement ring for you to pass down.