How Are Diamonds Cut? 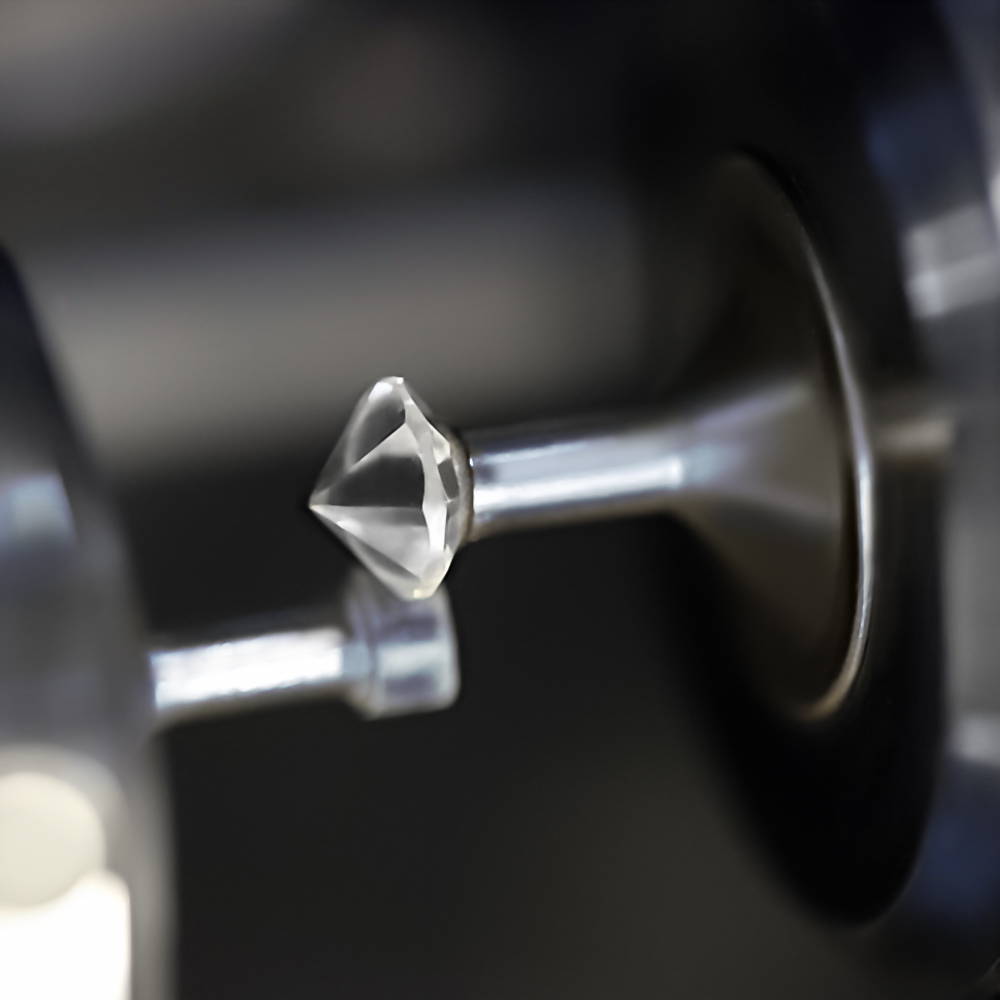 Diamonds are perhaps the single most stunning natural phenomenon. Not only are they formed over billions of years under intense heat and pressure, but they are also incredibly hard. In fact, diamonds are the strongest natural material known to man. Some of the most demanding industrial applications use diamonds in saw blades, drill bits, and lasers.

But diamonds don’t come out of the Earth as nicely cut, faceted gems. Diamond, composed of covalent bonded carbon atoms, is formed around 100 miles below the surface where the right amount of heat and pressure exist. Ancient volcanic activity is usually a good indicator of where diamond can be found. The high pressure of molten lava, when erupting, carries with it to the surface rock that has been subjected to the conditions favorable to diamond formation.

Diamonds that are found in that xenolithic rock are octahedrons, which means they look like two four-sided pyramids stuck to one another. Often their surface is marred with scratches and grooves; their insides are clouded with inclusions. Rough diamond is nowhere near as beautiful as the faceted, polished gem we’ve all come to admire.

How does a diamond cutter turn the hardest natural material into something beautiful?

It all comes down to talent, tools, and training. Here’s a quick rundown on how diamonds are cut:

After being removed from a mine, a diamond is sent to a diamond cutter. The diamond cutters job is simple: cut the most beautiful and largest stone from the rough diamond with as little waste as possible. Easy, right? Not so fast.

The first step in that process is to examine the rough diamond and decide where the value lies. For example, let’s pretend there is a 2.00ct piece of diamond rough on the cutters bench. The cutter sees that there is a section of diamond that is relatively clear of inclusion and free of major discoloration roughly the size of a .75ct round. With the rest of the stone, there are two .10ct size round shaped areas that also look promising. She then marks the diamond accordingly; outlining the general cutting plan all while minimizing waste.

Cleaving is the process of taking the rough diamond and turning it into the basic shape the cutter wants. In order to make that first separation, the cutter uses a specific cleaving tool that is coated with other diamonds! Since diamond can only cut diamond, the cutter is limited in the tools they can use.

The risk in cleaving is tremendous. If the rough diamond contains inclusions, especially those that break the surface, it is quite possible the force used to cleave the diamond can cause the entire stone to shatter. If a cutter determines that cleaving is not necessary, she can move straight to the sawing process. It saves some time and a whole lot of stress.

If cleaving is compared to using a sledgehammer, sawing is akin to using a precise laser. Cleaving breaks the gem in half along a molecular plane, often to separate an undesirable piece from a rather large diamond crystal.

The sawing process, when cutting for a round diamond, essentially cuts the octahedron in half, leaving two halves that each come to a point. That sawing process is usually done with an extremely thin phosphor bronze blade that is coated in diamond dust. Even though the cutter is using diamond to cut diamond, the sawing process can take hours to complete. Diamond is that hard!

At this point in the process, the cutter has on their bench a diamond with a flat top (this will become the table, or top facet) and four sides (these will become the pavilion facets) that come to a point (the culet). Congratulations! The basic shape of the round diamond is complete!

When looking at a finished round diamond, there is a specific place where the long, angled facets break over to meet the table. Some refer to this as the ‘waist’ of the diamond. The technical term is the girdle.

In order to make this important cut, the rough stone is held securely in a lathe while another diamond is placed precisely in the area where the cutter wants to establish a girdle. As the lathe turns, the diamond to be cut spins against the other diamond and slowly begins to resemble a cone as it wears. The girdle is born!

The cutter now has a cone shaped diamond with five facets, or sides. Even though the diamond doesn’t sparkle like a fully faceted gem, it has come a very long way from a piece of carbon stuck under millions of pound of rock for billions of years at temperatures around 2000 degrees Fahrenheit.

Jewelers have been using diamonds for hundreds of years, always searching for ways to make them sparkle more. However, it wasn’t until very early in the 20th Century that the way round diamonds are cut now, known as the Modern Brilliant, was developed. Marcel Tolkowsky, a Belgian jeweler, developed this cutting method that maximized light performance in a diamond (made it sparkle WAY more than it did before) as part of his PhD thesis at the University of London.

Now that was a useful degree!

In short, part of that process calls for installing 58 individual facets on a round diamond. The delicate part of this operation is that each facet must be placed in the most mathematically precise place with just enough of an angle as to make the gem appear symmetrical and attain the most light performance. Keep in mind that Tolkowsky developed this process in 1919 when a sizeable portion of the Western world did not have running water or electricity in their homes—let alone a computer!

While computers and advanced imaging software are used by more technology-friendly diamond cutters, there still is a contingent of the old-guard who create stunning diamonds using nothing more than their intergenerational knowledge and artistic dispensation.

I know, we’re impressed too.

Once the faceting is completed, the overall look of the diamond is 99% complete. All the facets line up like a hall of mirrors, bouncing light off one another until that light comes back as fire to your eye. The cutter may need to clean up some of the facet lines that may not have come out exactly perfect during the faceting process.

Once the cutter is satisfied with her product, the diamond will often go to a quality control desk to make sure there are no issues with the gem that need to be addressed before it heads to market. Often, the cutting house will employ someone who will grade the diamond and assign it a color and clarity grade. Most larger diamonds will make their way to a grading laboratory, such as the Gemological Institute of America, where the characteristics of a diamond are certified by a team of gemologists. In the case of round brilliant diamonds, the cut, polish, and symmetry are all graded too.

Diamonds have a long journey from the mine to the showcase. Along that journey, there are many issues that can make a diamond undesirable for use in jewelry. That’s why jewelers like JB Hudson/Gunderson’s help you navigate that process and ensure you celebrate your love with a diamond that is not only beautiful but will last a lifetime.